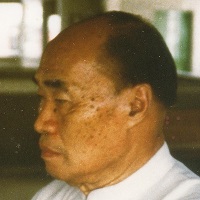 Later he also trained under Master PanZhuangnian (潘桩年), who educated Huang in Chinese Medicine and the Literary Classics.
Subsequently Huang opened a school in Shanghai where he trained together with his friends Chung Yu-Jen (Taiji), Chiang Hai-Ching (Xingyi) and Yang Chih-Ching (Bagua). He also studied Taiji with Wan Laisheng (万赖声), a China Martial Arts Champion 1938 famous for his Natural Boxing (自然门 Ziranmen).


白鶴拳 baihequan (CN)
In 1947, having moved to Taiwan, he began Taiji with Zheng Manqing – a direct disciple of Yang Cheng-Fu. Quickly Huang entered the inner-school and in later years came to be regarded as Zheng's most accomplished disciple.

From 1958 on Huang lived and taught in Singapore and Malaysia where he established 40 schools and taught 10,000 people. He attained permanent residence in New Zealand shortly before his death in Fouzhou, China, December 1992.
During the last 5 years of his life he gathered around him 40 active initiated members of his inner-school and to them attempted to pass his final teachings. In choosing these people, he said, he was mostly concerned with the sincerity of their inner motives.

He explained that he wished no one person to make claims as his successor but that he hoped the combined knowledge of these 40 (of whom only a few continue to teach today) would contain the essence of his methods and these people would represent his teaching for the future.

Are there different schools or sects of Taiji?

Taiji embodies a comprehensive set of knowledge, developed and handed down by our learned predecessors with mystifying principles and profound philosophical learnings. ...

Our predecessors developed the art for improving human health, warding off sickness, slowing down the ageing process, achieving longevity and defending oneself...

Once there is internal and external synchronisation, then the question of slow and fast in practice is unimportant. At this stage, one gets the feeling that the upper portion of the body is like the drifting of clouds and the lower portion is like the flowing of water.