The father of modern Taiji. 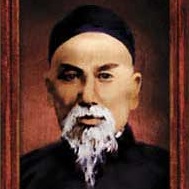 The name Taiji was first given to the art of Yang Luchan, according to recently discovered imperial records, by the famous Qing Dynasty scholar Weng Tonghe (翁同龢, 1830–1904).

Previously Yang’s art had been referred to as Mien Quan (綿拳 Cotton Fist) or Hua Quan (化拳 Neutralising Fist). In his later years he was famous for never losing a match and never seriously injuring his opponents.

Having refined his art to an extremely high level, he came to be known as Yang Wudi (楊無敵, Yang the Invincible).
杨露禅生于广平县，被广为铭记是现代太极之父。作为传统，他教授的太极被称为杨氏太极。自此又派生出吴氏太极，孙氏太极及其他少数流派。
Yang Lu-Chan of Guangping, is remembered as the father of Taiji. The art passed on by him was called Yang family (Yangjia) Taiji. From this sprang Wu Taiji, Sun Taiji and most other minor modern styles.
In 1850, Yang was hired by the Imperial family to teach Taijiquan to them and several of their élite Manchu Imperial Guard Brigade units in Beijing's Forbidden City.

While teaching at the Imperial Court Yang met many challenges, some friendly some not, but invariably his soft techniques prevailed so convincingly that he gained a great reputation. Many who frequented the imperial households would view his matches.

At one such gathering in which Yang won against several reputable opponents, the scholar Ong TongHe was present. Inspired by the way Yang executed his techniques Ong felt that Yang's movements were a physical expression of the philosophy of Taiji.

Thereafter, Yang Luchan's art and the styles that sprang from his teaching and by association with him, were referred to as Taijiquan.
Following the death of Yang Luchan, his 2 sons, Yang Banhou (杨班侯, 1837–1890) and Yang Jianhou (杨健侯, 1839–1917) along with other senior students continued to spread and enhance the fame of what was to become known as Yang Style Taiji.

Yang Chengfu (杨澄甫, 1883–1936), son of Yang Jianhou, recalled that his grandfather Yang Luchan had handed down these words on the history of his art, ”Taijiquan began with Zhang Sanfeng (張三丰) at the end of the Song dynasty (960–1279).

My teacher Chen Changxing (陈长兴, 1771–1853) was the only disciple of Jiang Fa. His art was based on the natural, and its form never departed from the Supreme Ultimate.

It consisted of thirteen postures with infinite applications. The movement is in the body, but the influence reaches the Spirit.”
In the early 1900s, with the passing of the older generations, Yang Luchan’s grandson Yang Chengfu was chosen as the figurehead for the Yang style and to strengthen the lineage all senior students were asked to bow before him. He formalised the 108 steps of the Long Yang Form.

[5] 對待無病 Crashing In, Collapsing, Coming Away, and Resistance