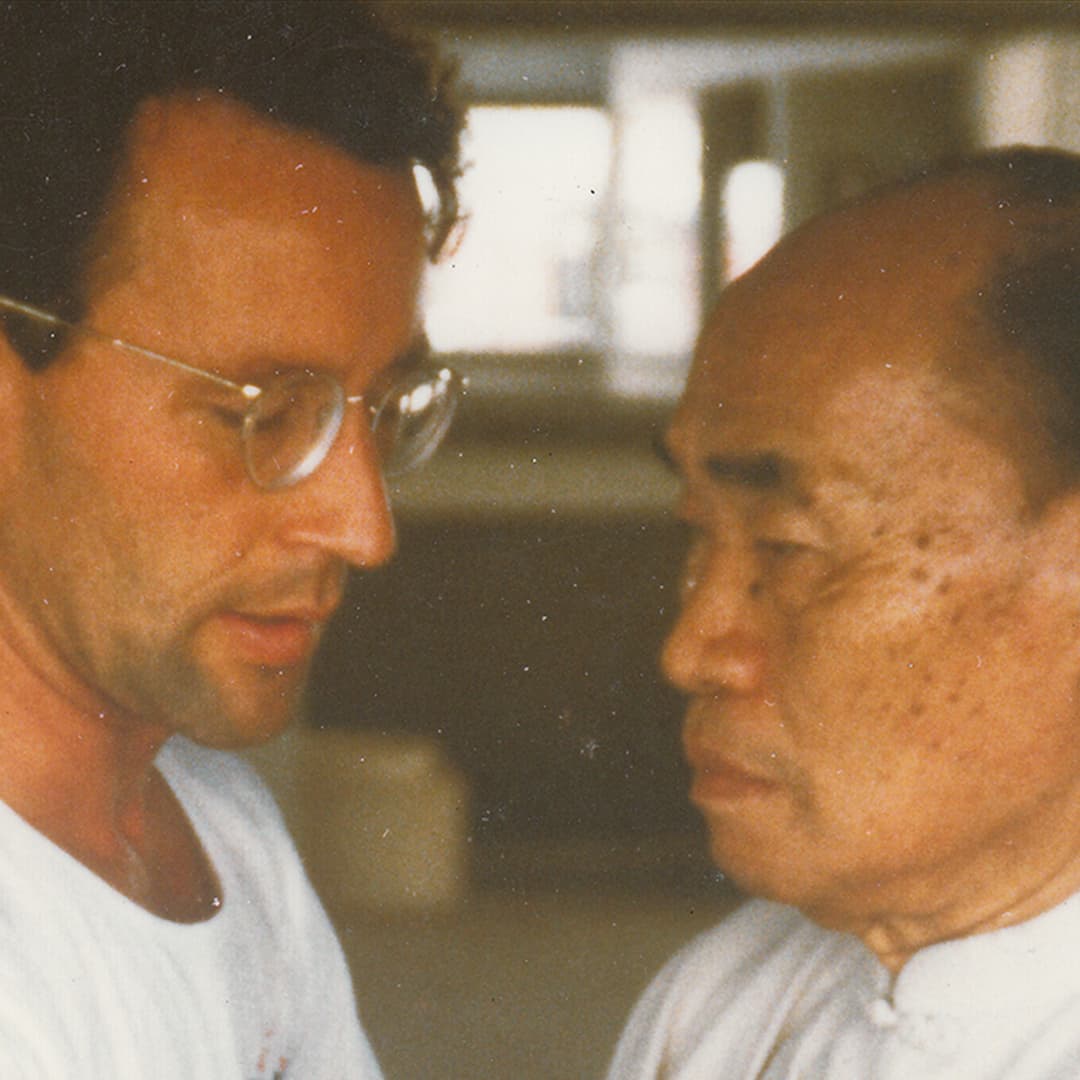 By Patrick A Kelly, September 2010

In remembrance of Master Huang Xingxian on the occasion of the 100th anniversary of his birth, and in response to the lifelong obligation I feel towards him as my teacher to pass on his teaching, I would like to write something of what he personally explained and taught to me some decades ago. Master Huang was both a martial artist and a Daoist. Although initially interested purely in martial arts he was gradually introduced to Daoism by his main Fujian Baihe (White Crane) teacher, Grand Master Xie Zhongxian, then later led deeper by his Taiji teacher, Grand Master Zheng Manqing.
值此黄性贤大师诞辰一百周年之际，为了缅怀先师，报答和践行终身传承其教诲之己任，我想写一些几十年前他亲自传授于我的知识。黄性贤大师既是一位武术大师也是一位道家大师。最初他只是专心于武术，但在其白鹤拳老师谢宗祥大师介绍下，以及后来在其太极老师郑曼青大师的引导下对道家理论有了深入的研究。

By the time I came to know Master Huang (I began to train his system in 1973), inside he was first a Daoist and only second a martial artist. Once when sitting outside eating, late at night in Kuala Lumpur in the late 1970's, he looked up at the stars, then gesturing to the expanse of the night sky he turned to me and said, "That is the big Taiji, inside us is the small Taiji", then after a moment's pause added quietly, "Now I teach Taiji, not Taijiquan." The depth and sincerity of expression behind his words, I have never forgotten. From that time I subtitled my practice and teaching of Master Huang's methods, "Taiji – Daoist Principles in Practice". The best remembrance of Master Huang is to practice and teach as accurately as possible the subtle expression of the deep art of Taiji that he left to the world. I offer this article with that aim.
我最初认识黄性贤大师时，(本人自1973年开始练习黄氏太极)，他首先是一位道家大师，其次才是武术大师。有一次在外面吃饭，那是70年代末吉隆坡某个深夜，他仰望星辰，指着茫茫夜空，转身对我说，"这就是大的太极，我们心中是小的太极"，稍稍一顿又静静地说："我现在教授的是太极，不是太极拳"。老师言语中深深的情愫，我至今难忘。自那时起，我开始将遵循老师的方法传授和演练的太极称为"道家理论实践之太极"。对黄性贤大师最好的怀念，就是尽可能准确习练并传授他留存世间的太极艺术。本人写下这篇文章，正是出于此意。

Internal Aspects of the Taiji of Master Huang Xingxian

我的老师黄性贤（1909-1993，生于中国福州，后移居马来西亚古晋）以近现代鲜有的深度、敏锐和细致习练和传授太极。我在1973年初次接触到他的太极训练，从那时起我便师从于他，直至他二十年后离世。为了让现在及以后致力于遵循和传承黄老师教义的朋友们能够受益，我愿意在这里分享一些他的太极教学风格和其他非常重要的细节之处，以飨后人。
Master Huang Xingxian (1909-1993), born in Fujou, China, later living in Kuching, Malaysia, practiced and taught Taiji with a depth and subtlety seldom seen in recent times. I first trained his Taiji in 1973 and continued closely with him until his death 20 years later. For the benefit of those who, choose to make some effort to follow his teachings, I would like to pass on something of his teaching style and details of the most important aspects of his Taiji.

正如他的老师郑曼青大师说自己是一个"从不厌倦学习的老小孩"一样，黄老师终其一生不断的提炼和改进自己的习练方法。在他付出诸多努力并最后达成自身对太极的领悟后，黄大师并没有在训练过程中轻易地将他的习练方法施于他的弟子，而是更多地给予暗示，然后让大家根据自己对太极的理解进行习练，成败在己。尽管最初对外国人存有疑虑，他还是逐渐接纳了我，此后还对众人强调说，太极练的好坏与种族毫不相干。他对个人努力的重要性深信不疑，说"生活是艰难的，即使我们在变得愈加成熟，但它并不一定就会相应变得容易；不过我们为之付出的努力和由此带来的进步却绝对是值得的。"
Throughout his life he constantly refined and evolved his methods – just like his teacher Grandmaster Zheng Manqing who described himself as "The Old Child who never tires of Learning". Having worked so hard to achieve his own understanding, Master Huang did not give away his methods easily, but preferred to give hints, then leaving people to succeed or fail according to their own intelligent practice. While initially suspicious of Westerners he gradually warmed to my presence, later emphasising to all that success at Taiji was completely independent of race. He strongly believed in the importance of personal effort saying, "Life is difficult and even when we become older it does not necessarily get any easier, but effort and the progress that comes from it is always fully worthwhile."

（1）问：太极拳道是否应分门派？
答：太极拳道学是一完整之大学问，为历代先贤先圣穷毕生智慧精心研究而成，其理奥妙无穷，包含崇高哲学，其动作循合科学，盖哲理乃科学之灵魂。师祖创此拳道旨在促使人类健康，祛病延年，防老防身之运动法门，已达到济世活人，益寿延年，修心养性，治国平天下之大道精神。太极拳道不为私人武术技击炫耀与显露武功好斗风气。传授此道者应知其理，通达其道，任何人无法脱胎改变其理。架子任何人可改创，其原理不可失真。其修炼拳架外形虽各有异，惟其理则一。为此不宜有门派之分，应怀太极一家精神，一心一德，本大公无私光明磊落之心，秉承拳祖精神，弘扬斯道，促进光大世界，使人类心身健康则幸。
Q: Are there different schools or sects of Taiji?
A: Taiji embodies a comprehensive set of knowledge, developed and handed down by our learned predecessors with mystifying principles and profound philosophical learnings. The Taiji movements are scientific as the principles are based on scientific fundamentals. Our predecessors developed the art for improving health, warding off sickness, slowing the ageing process, achieving longevity and self-defense. All this benefits mankind and society. Good character formation is promoted. An adherent imbibed with the Dao (or philosophy as a way of life) of Taiji would contribute towards proper governance of the country and universal peace. Taiji is not a martial art meant for bragging and antagonistic purposes. A Taiji exponent would need to understand the principles and philosophy of Taiji. No one should deviate from these principles and philosophy. The movements can be developed and modified but the principles are eternal. The external forms may differ from person to person but the principles are standard and unvarying. Because of this there is no basis for differentiation by schools. Instead a spirit of a single family should prevail. Common interest of the art should take precedence over personal interest. An open attitude should emerge, bearing in mind the spirit of the founder and predecessors to propagate the philosophy of Taiji throughout the world so as to improve the health of mankind.

Q. What is your understanding of how, and when, Tai Chi emerged?

There are really two versions of Tai Chi history – a written academic one and another which is passed down from teacher to pupil. My teacher (Master Huang Xingxian) had his history that he had been told by his teacher who had been told by his teacher and so on. I trust that one more because each of these people in the chain trained for a long time, 20 years or more with their teachers. Their teachers passed on their genuine knowledge that they had received from their own teachers. Then there are the written historical records and these are incomplete really, because especially in older times the teacher never gave out the information - this was a type of secret information that was passed on from teacher to pupil... read more below
EN DE FR downloadarticle.pdf

In remembrance of Master Huang Xingxian on the occasion of the commemoration of the 100th anniversary of his birth, in response to the lifelong obligation I feel towards him as my teacher to pass on his teaching, I would like to write something of what he personally explained and taught to me some decades ago. Master Huang was both a martial artist and a Daoist. In time he was first a martial artist, then was gradually introduced to Daoism by his main Fujian Baihe (White Crane) teacher, Grand Master Xie Zhongxian, then later led deeper by Grand Master Zheng Manqing. But by the time I came to know Master Huang, inside he was first a Daoist and second a martial artist. Once when sitting outside eating, late at night in Kuala Lumpur, he looked up at the stars then gesturing to the expanse of the night sky he turned to me and said, "That is the big Taiji, inside us is the small Taiji", then after a moment's pause added quietly, "Now I teach Taiji, not Taijiquan"... read more below
EN FR downloadarticle.pdf

Master Huang Xingxian accomplished a great work in establishing and evolving his Taiji teaching within South-East Asia and congratulations are due to the Singapore Taiji Society for successfully reaching its 50th anniversary. This success is not independent of the great contributions of Sia Mok-Tai and Samuel Kuah as head instructors over those years during which I have had contact with the Society. Though to manage such a society involves difficulties, these fade into the past and lose their importance in the light of the overall success the Singapore Taiji Society has had in helping the citizens of Singapore through the teaching of the refined and genuine methods of Master Huang's Taijiquan... read more below
EN DE ES FR NL downloadarticle.pdf

What have you gained from your years of Taiji work?

Internal evolution is the main result of practise under the direction of a genuine teacher. Effort and sacrifice is the cost. In my early twenties, with 10 years training in Western martial arts, some knowledge of yoga and meditation, and about to complete my university studies, I made the decision to concentrate my life on the search for inner meaning and development. Boxing and wrestling had no depth, Yoga had depth but was too passive, while meditation lacked balance without some complementary training... read more below
EN DE ES FR IT NL download IL.pdf

The Death of a Master

(Originally published in the St Benedicts St Taiji-school Magazine and later in the American "Tai Chi" magazine.)
In December 1992 ten thousand Taiji exponents felt the loss of their teacher, Master Huang Xingxiang (Huang Sheng-Shyan). He died in Fuzhou, China, the place of his birth 83 years earlier – having returned there a few months before his death after 43 years spent living and teaching in first Taiwan then later Singapore and Malaysia. He left behind approximately 35 independent schools throughout Malaysia, Singapore, Australia and New Zealand. Each of these schools has professional instructors and many have more than one hundred students. The first of these schools were formed over 30 years ago in Singapore and East Malaysia. I personally established a school in Auckland New Zealand in 1979 after 7 years training under Master Huang and his senior instructors and being accepted as one of his personal pupils in 1978... read more below
EN FR downloadarticle.pdf
← 9cloudstaiji